The official route travels between Annan on the Solway Forth to South Queensferry on the Firth of Forth near the Scottish capital of Edinburgh. It uses cycle paths, converted railways and A and B roads a total of 125 miles.

I met clients Judith and David in Annan and after a cuppa and a chat we headed off up the High Street and out towards Brydekirk. We were heading for Moffat, our first overnight stop, via Lockerbie and Applegarthtown.

In Lockerbie we visited the memorial garden and information centre. A sobering experience for them both. There was also an exhibition by the local weavers guild which was a great hit with milliner Judith.

The detour to Lockerbie meant leaving the official route and going on to the busier B723 but leaving the garden you are soon back on the route and on quiet unclassified roads. Our next, short, detour was to check out Applegarthtown Kirk. This church is well kept and with a large green is an ideal food or drinks stop. All roads now led to Moffat.   The route passes through rich undulating farmland.  We had been very lucky with the weather and the countryside was shown off in gorgeous light with a hint of autumn showing on some of the trees. 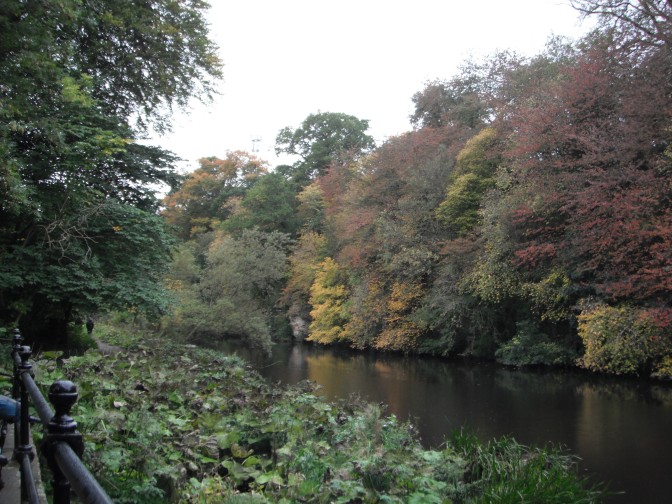 We arrived in Moffat and were soon unloading our bikes outside the Stag Inn. Bikes were stored in a locked area to the rear of the hotel. Stats for the day, 34.4 miles covered 1500 feet climbed at an average speed of 8.8 mph in a moving time of 3:54:55. After settling in and having a short walk around the main Street we headed back and got freshened up and went out for some food. I was soon to learn that as well as a cycling trip this was a culinary adventure for the two Californians. They examined the Buccleuchs menus eagerly and soon stovies and steak and ale pie were winging its way to our table followed by sticky toffee pudding.

I suggested that we have breakfast early, go back to our rooms for an hour or so and leave at 10.

Today’s destination was Peebles and the first 5 or so miles is all uphill to the Devil’s Beeftub a very gradual but long climb on the A701 which you are on for about 17 miles. Although an A road it is not busy and the views of the Annan and Tweed valleys are amazing. No detour planned today we followed the C2C religiously stopping for an occasional Moffat toffee which I had bought as a treat in Moffat to have at the top of the Beeftub.

The route is undulating but the uphills all seem to be easy and gradual with some amazing descending. We took the Cademuir option heading around the hill and into Peebles via Frank’scroft.

We got booked in to our rooms in the Neidpath Inn and headed out for a walk along the main Street. While we were out David spotted a cafe advertising fish teas. That was dinner sorted!

A strange arrangement for breakfast meant that we were standing outside Ramblers cafe the next morning at 1030 for breakfast. Lovely it was too. With David trying tattie scones and Judith sliced sausage.

The late breakfast meant a late start but I wasn’t too concerned as it was a short easy day.

We left the cafe at 1130 and headed through Peebles to pick up the railway path a great traffic free stretch which did have a diversion at Cadrona for some minor works but we picked it up again and continued onto Innerleithen.

Once clear of Innerleithen a steady climb up the Moorfoot hills gives you the first view of Edinburgh and the Firth of Forth.  Our destination today was the Laird and Dog in Lasswade once more coming off the “official” path but allowing me to put several route options to Judith and David.

Day 4 was another early breakfast but with a late start to the cycle.  We discussed route options and decided that we would come off the C2C on the River Esk way and pick up the Innocent Railway travelling through Holyrood Park past the Par;iament and Palace and into the city centre where Judith and David would rid themselves of their panniers and we would then continue on the South Queensferry to dip their wheels in the Forth.

David and Judith were amazed at the miles of converted railway as we barrelled along on traffic free cycle path.  Eventually the railway came to a halt at the Innocent tunnel and we descended through Holyrood Park. 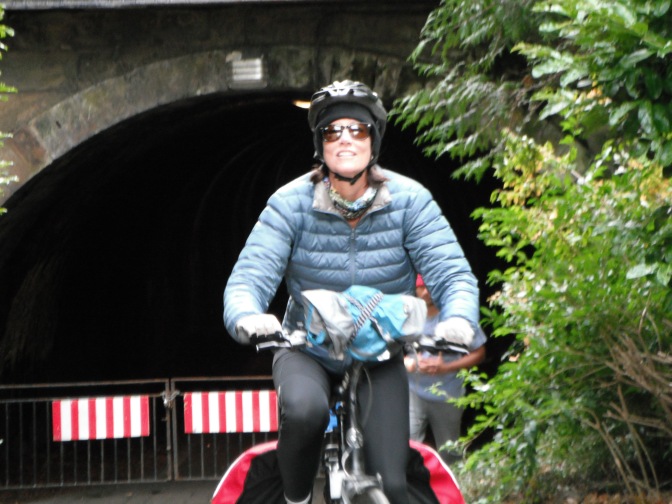 We followed a convoluted route through the city as I pointed out places of note.  As planned we dropped off bags at the hotel and headed towards the water glistening in the distance.

Being in a city meant that we did have to take some roads but where possible we stuck to old railway routes, cycle lanes and promenades.

The final miles was along by the side of the Forth bringing us out under the iconic rail bridge and next to a handy ramp into the water for the ceremonial dipping the wheel! 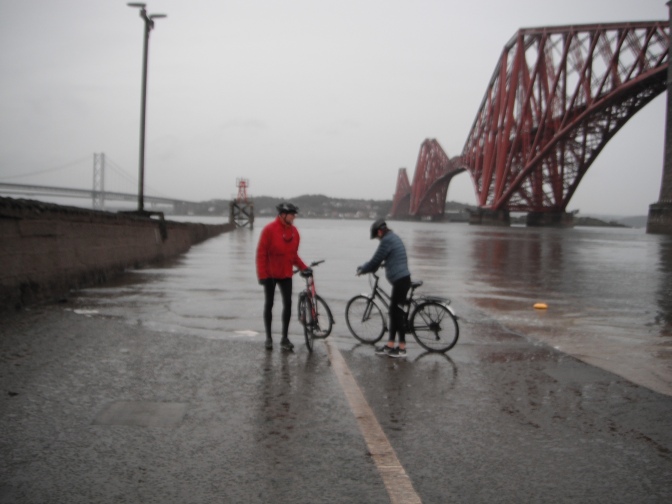 That was it C2C but the day was not done as Judith and David wanted to cycle across the Forth road bridge this was duly accomplished and we travelled onward to Inverkeithing railway station for the train back to Edinburgh.

A great tour.  Made even better by the people we met and the places we stayed..

I am a 60 year old Scottish cyclist. I run, bike, walk and do the odd race. I have taken outdoor qualifications and coach others. I am the owner of and guide for Scottish bike touring. View all posts by Jim Taylor